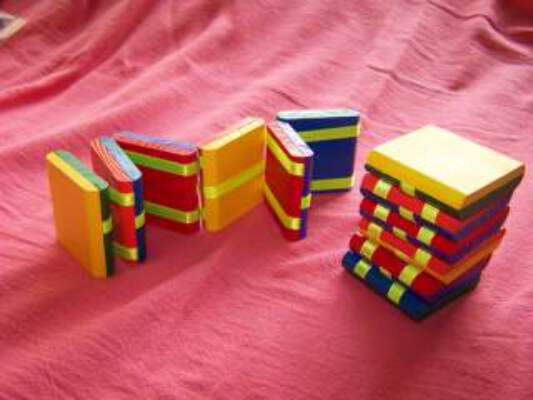 The Jacob's Ladder is a beautifully simple sensory folk toy. It is calming to play with and although it dates back hundred's of years it still keeps both adults and children mesmerised.

Legend has it that one was found in King Tut's tomb, meaning the Jacob's Ladder was played with in Egypt before 1352 and worldwide it is still a very popular toy today.

It is named after the biblical Jacob who in a vision, saw a ladder leading from Earth to Heaven.

Jacob's ladder works by grasping the outer edge of the upper block and let the rest of the blocks swing downward until it is fully open, then gently tip your wrist about 180 degrees to the left until the top and second block are parallel and touching.

Be warned: Playing with this toy is very addictive and there is a magic trick too that I can send you if you request it.

Not suitable for under 36 months